Burbank is well-known for its historic landmarks and memorabilia. Earlier this year, the town said goodbye to both as Dimples, dubbed America's first karaoke bar, delivered its swan song.

When Sal Ferraro went to a Hollywood party in 1982, he came across what they then called The Singing Machine. It was (supposedly) the first one to be available in the US, and Sal saw it as a great opportunity. He had already owned a nightclub in nearby Burbank, but wanted to showcase something new and different. Thus, on April 15, 1982, after a swift purchase of that dusty music box, Dimples was born.

At the time, lyrics had to be read from a book. Business was a little slow, but after some time and the development of the CD later that year, the bar quickly became a regular hangout for Valley residents. With its location so close to industry studios and other local hotspots, patronage often included celebrities and talented artists on the rise. Saved by the Bell's Dennis Haskins was a regular at Dimples, and has long voiced his support and appreciation for this local gem.

Dimples was known for its seemingly odd quirks. The bar itself was filled (some would say cluttered) with all sorts of historic memorabilia, including a dusty old camera made by Thomas Edison. The stage held props for singers to utilize, including an often used set of elf ears and the almost mandatory Santa hat. As they prepared to sing, female guests were often taken aback when their song selection got swapped out for "My Humps" by the Black Eyed Peas; a common gag used on first-time customers. Sal would make his way through the crowd with antics that both amused and offended. It was the type of dive joint you either loved or hated, but for those who did enjoy, it became a real treat. Whether stopping in for a drink after work or a weekend night out with friends, there was always fun to be had at Dimples.

With the huge growth of karaoke over the years, other bars kept popping up all over town. Competition became stiff, and business suffered. By the time Spike TV's Bar Rescue crew showed up, one could say that Dimples was already on its last leg, and although appearing on the show did boost sales for a time, its era was coming to an end. Owner Sal Ferraro, though still showing confidence, had to admit defeat. As he announced closure, a wave a sadness hit the community. This iconic bar they had treasured for so long was about to be lost forever. Soon crowds gathered each night to say goodbye. Celebrities poured in for one final song. Best friends raised a glass to the place they first met. So many came, in fact, that hours had to be extended to include Sunday nights, the one day of the week the doors usually remained closed. April 15th was a sad day for many, but the memories live on. In an effort to keep pieces of Dimples in the hands of those who truly loved it, Sal sold off his memorabilia to the local community in a fan-geared lot sale. 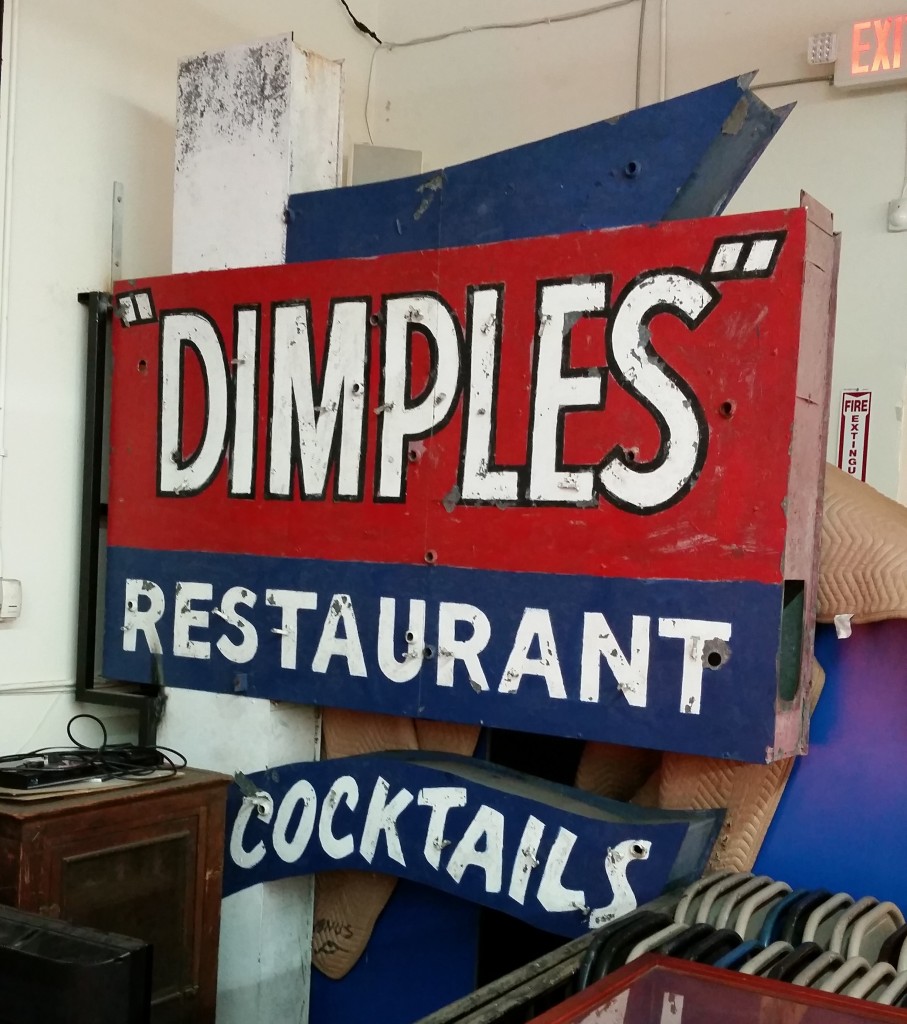 One of these items remains here at the Valley Relics Museum. The Dimples sign hangs proudly on our walls as yet another source of local history otherwise lost. Thank you to all the fans who continue to support us and help in salvaging these rare gems.