The Valley Relics Museum collections include hundreds of matchbooks, each one representing a former Valley business, restaurant, or group. In the days when nearly everybody was a smoker, printing up a book of matches with your logo and phone number was a smart way to market your business. Put a basket of them on your counter, and customers would pocket them on their way out the door, keeping your contact information close at hand, or maybe even passing it on to somebody else who needed a light. Some particularly "masculine" businesses like auto repair shops went even further to stick in their customers' minds, and printed cheesecake pictures of swimsuit-clad ladies on the backs of their matchbooks.

This matchbook, however, is not one of those (I hope you're not too disappointed!). The same marketing concept easily applied to political advertisements. What we have here is a relic from the 1960 congressional campaign of Valley city councilman James C. Corman. In one neat package, matches to give you a light, and a nifty campaign button to pin on your shirt! 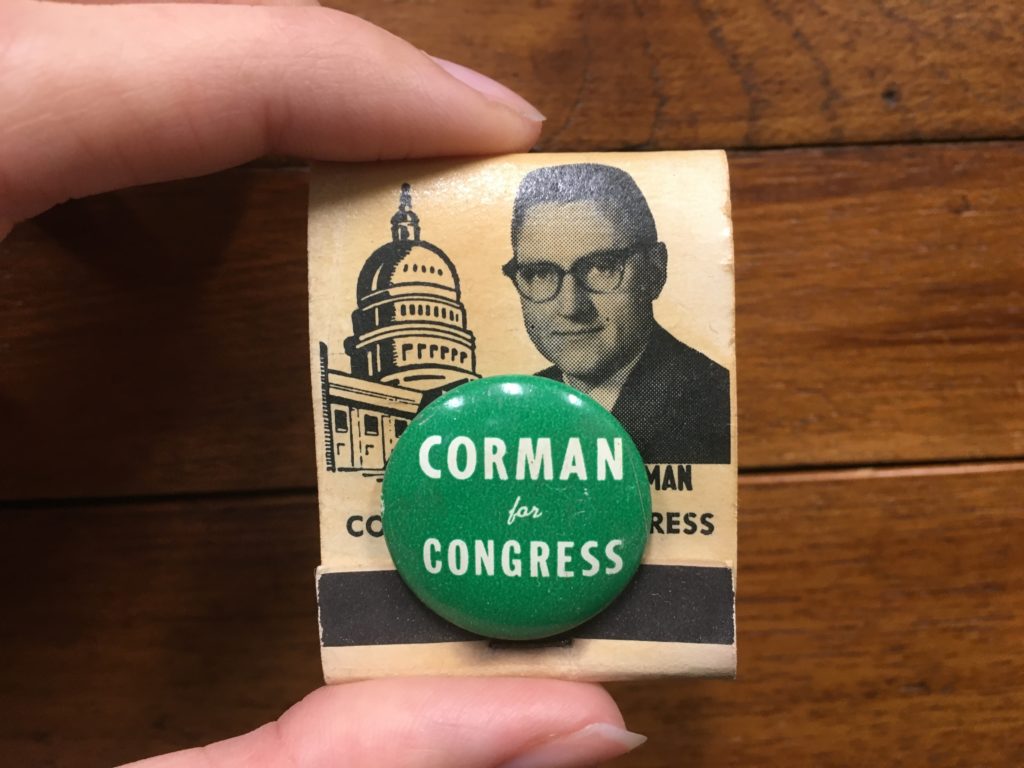 "Attorney. Veteran. Responsible Public Official." Could any political candidate today represent themselves in just five words? James C. Corman was indeed all three of these things. He first came to LA as a child with his widowed mother, migrants from Kansas in the Great Depression. His university studies were interrupted by World War II, where he served as a Marine in the Pacific. By the late 1950s, he was practicing law in Van Nuys, and in 1957 he was elected to the LA City Council, representing the newly-established San Fernando Valley District. Corman never finished his four-year council term, however. The "responsible public official" launched a campaign for Congress, matchbooks and all, and represented the Valley in Washington from 1961 until 1981. 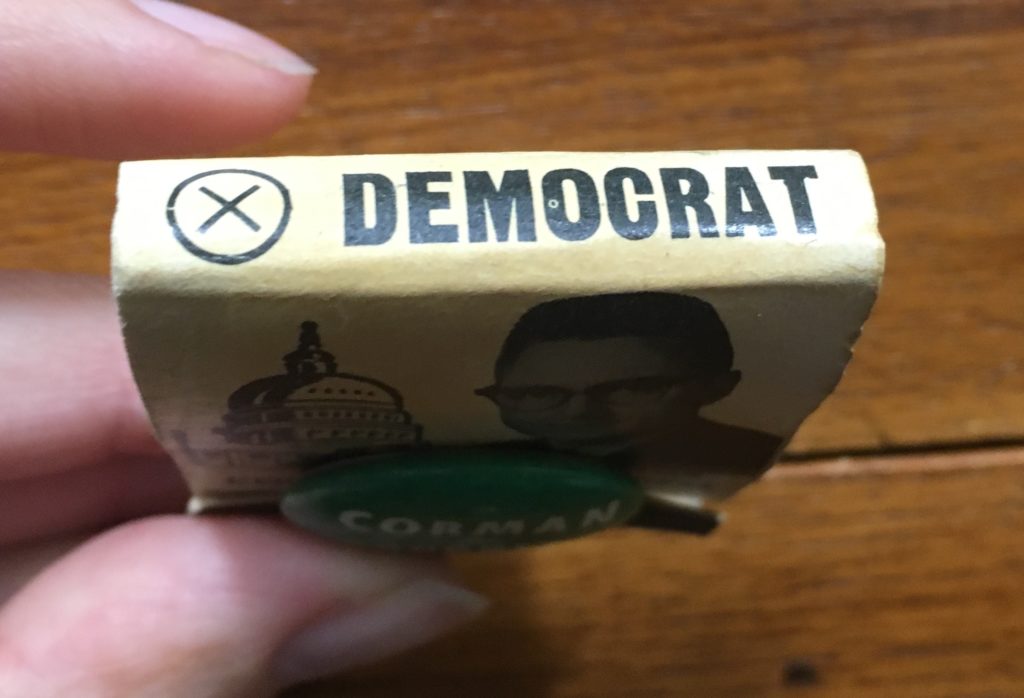 On Corman's passing in 2000, he was remembered for his role in creating legislation that expanded civil rights and worked for welfare reform. As a member of the House Judiciary Committee, he helped pass the 1964 Civil Rights Act, which outlawed discrimination based on race, color, religion, sex, or national origin. Throughout the 70s, he devoted his energy to the social welfare of the poor, reminding Congress to think about their legislation's effects on human beings, not just about its impacts on state governments.

In the Congressional election of 1980, Corman finally lost his seat in the House to Republican Bobbi Fiedler. It was one of the closest congressional races in California history--he lost by a margin of only 752 votes (out of 153,770 cast). The deciding factor was the issue of busing to desegregate LA schools--Corman was for it as a last resort; Fiedler was fervently against it. After leaving Congress in 1981, Corman donated his files to CSUN and became a Washington lobbyist.

Matchbooks, like postcards, are what is known as ephemera: "transitory written or printed matter not meant to be retained or preserved." They were meant to be used and discarded, the matches torn out, the booklet tossed. A few old "Corman for Congress" buttons might survive at the bottom of junk drawers scattered around the Valley, but how many people would ever guess that 58 years ago, they came with a matchbook? James Corman has a more permanent memorial--in 2001, the Van Nuys Federal Building was named in his honor. But this relic from his first congressional run is a unique historical artifact that has survived unbroken to the present day.