The image below displays a premiere product from Infinity Systems. If you recognize the object withing the image, go ahead and give yourself a round of applause. If you happen(ed) to own one of these, look out in the mail for a much deserved certificate that reads 'Rockstar', because you are officially proclaimed awesome. The product below is none other than the Servo Statik I, created in the late 60s by a small team of talented engineers. 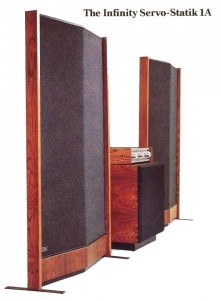 Just imagine. The year is 1967 and you are assigned the task of creating a new weapons system designed to increase accuracy of air raid bombing. And yet, a passion for acoustics veers your thoughts into building an entirely different type of system. Sound strange? Well, that's exactly how events unfolded for Infinity founders John Ulrick and Arnie Nudell.

Ulrick and Nudell were employed by Litton Guidance & Control Systems, a facility located in Woodland Hills. Working as electric engineer and physicist, respectively, they built a laser rangefinder that measured the distance from an airplane to the ground, increasing accuracy. John was to design the electronics (a servo-control system) and Arnie to design a Q-switched ruby laser that would bounce between the two points. Weapons development may have been their job, but John & Arnie were certified audiophiles. During testing of the rangefinder, the idea came up to create a servo-controlled speaker. They searched the Litton library and found a book called Acoustical Engineering (the first of its kind) by Harry F. Olsen, but the single page within it on Servo Controlled Systems displayed nothing but a simple block diagram. The two then had to design the system themselves. Arnie called in friend Gene Czerwinski to make a custom 18-inch woofer with a second winding to generate the feedback signal. A Sherwood amplifier was used to drive the electrostatic panels, tweaking the feedback to desired effect. This creation would be the beginning of something special.

Together, Ulrick and Nudell decided to start a company. Originally named Nutec, they began selling a system called the Servo Static I, with industrial designer Cary Christie joining their ranks. When it came time to incorporate in 1968, the company name Nutec was already taken. They wound up settling on their third choice and, thus, Infinity was born. Taking root in a 2000 sq. ft. building in Chatsworth, the company began its run with three speakers on the market; the Servo Statik I, the 2000 (bookshelf with electrostatic tweeters), and the 1000 (2-way bookshelf speaker).

The story of the company's success in design and innovation is interesting in that much of what these two men experienced at Litton translated into their work at Infinity. Their time working on defense systems to be used in war would now be spent designing advanced systems to be used here at home, in the comfort of one's own living room. It's interesting to ponder how different their lives would have been, had they continued in the field of weapon defense.

This article comes in recognition of the unfortunate passing of Infinity co-founder John Ulrick. After fighting off cancer for some time, John succumbed to it after the illness spread to his brain. On May 20, 2015, he passed away with family at his side at the Henry Mayo Newhall Memorial Hospital in Valencia, California. He is remembered as a kind gentlemen of the industry and will be fondly remembered in all years to come. We bow our heads in recognition of this great man, and honor the legacy he has left behind.