In the summer of 1982, a spaceship descended upon the San Fernando Valley. Within it, an adorable (not at first) alien crept his way into our hearts with his almost gluttonous obsession with Reese's pieces. Through a close bond with a young boy named Elliott and his friends, this extra terrestrial finds an unexpected love and sense of belonging here on Earth.

Now, if you are unfamiliar with E.T: The Extra Terrestrial, I could not even begin to wonder what kind of unfortunate life you've had. We all know at least one person who still has a dusty old VHS stashed somewhere amidst their household clutter. Not only is this film an absolute classic, but as a local it serves as an interesting batch of nostalgia. Shot almost entirely in the Valley, the film takes place in just a few locations, which keeps the sense of environment rather small and homey. Nearly all areas used in the film can be recognized by residents or those familiar with the Valley, most notably the Porter Ranch and Granada Hills area.

E.T. finds a temporary home with young Elliot at 7121 Lonzo Street in Tujunga, a residence still used today. This house had just recently completed construction in 1980 when filming began in September of 1981. Cast and crew served as this new building's first tenants, stirring up a rather unique welcome to the neighborhood and an almost instant notoriety. A large portion of the film takes place within these walls, as the story develops with Elliott hiding the young alien inside his room. 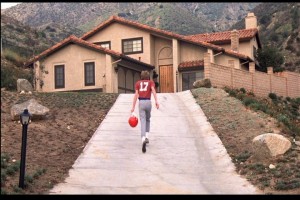 Funny enough, this same house was used in the 2000 film Charlie's Angels, starring Drew Barrymore (who played Elliott's younger sister in E.T.). In it, Barrymore's character stumbles upon the house in a rather awkward predicament. There, she finds two boys playing video games in the living room, with references to the classic film included in the shot.

The bus stop that leads our young stars on their way to school does not actually exist. Located at 19230 Vista Grande Way in Porter Ranch, this setup served only as a film set. No children stood waiting in the background to hop on their actual bus between takes. 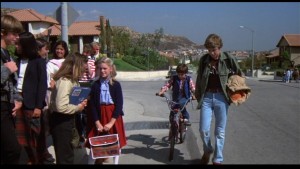 The park used in the film was none other than Porter Ridge park, located at the intersection of Reseda Boulevard and Sesnon.

And who could forget the following scene:

The infamous bicycle chase scene spanned from Porter Ranch's Killimore Avenue, across Beaufait and Eddleston Drive, and through Aliso Canyon Park. The final length of the chase takes place along White Oak Avenue and Tulsa Street. The shot of Elliott flying in front of the moon is one of the most recreated (mostly parodied) scenes of all time. Also, bicycle accidents among children skyrocketed for years after the film's premiere. As did helmet sales.

An interesting side note is that this stretch of White Oak actually contained 114 Deodar trees that were declared a Historic Cultural monument in 1966, preserving their longevity in this well-known neighborhood.

Elliott's neighborhood becomes home to all of us during this interesting journey. The symbiosis that develops between the two of them spreads its way outside of the viewing screen and it's hard not to feel attached. Alas, after some hijinks and a bit of danger courtesy of the government, E.T.'s own longing for home eventually finds him leaving our planet forever, though our memories of him are clear as day. Personally, the image above still pops into my head at least once a month.

Classic films never go out of style. They represent a specific point in history that can never be replicated. With countless remakes being doled out, one must wonder what the real goal is (other than money). Thinking back on past films, and especially their often now-extinct locations, they can never truly be "re-made." E.T. is one of those films that could never recapture the magic of the original.