There's a special corner of the Valley Relics Museum dedicated to a man of unique talent and taste. A man well-known to local history buffs, classic country music fans, and lovers of vintage fashion. A man known to the world as Nudie Cohn. If you laid eyes on some of his work, you're likely to be hit by a wave of nostalgia. But how much is known about the man behind the fashion?

Nudie Cohn was born December of 1902 in Kiev, Russia. He grew up with his Ukranian Jewish family before relocating to America with his brother at the age of 11. Cohn spent quite a bit of time traveling across the country until the early '30s. While staying in a Minnesota boarding house, he would find love in Helen "Bobbie" Kruger, his future bride. The couple married in 1934 before moving to New York City. There, they opened up their first shop, "Nudies for the Ladies", which provided custom-made undergarments for local showgirls.

In the early 40s, Nudie and Bobbie would relocate to California, where they continued making clothing out of their garage while looking to build their brand. Confident in his work, Cohn had his eyes on prospective clients such as Roy Rogers and Dale Evans, although he figured it would be wiser to first have a storefront. Instead, he approached a young Tex Williams and the two came to a mutual agreement. In exchange for help in advancing the business, Nudie would create a new suit for Williams. As so, Tex auctioned off a horse in his possession, and the money gained went to purchasing a sewing machine for Cohn (which at the time cost $150), who would soon after fashion a custom outfit unique to his name. After a sold out show at the Riverside Rancho, Williams made enough money to actually pay Nudie and the rest, as they say, is history. Things only got better from there. 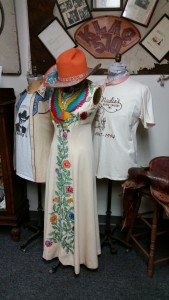 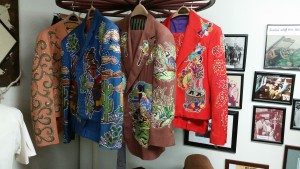 As business grew, Nudie and his wife expanded, opening up shop at the corner of Victory and Vineland. Clientele grew steadily and included many high-profile individuals, such as Spade Cooley, Cliffie Stone, and Lefty Frizzell, the latter of whom came to the company requesting an outfit that could be seen from the furthest section of his audience. Frizzell later took the stage sporting a highly fringed, western-style attire adorned with rhinestones (Nudie's unique touch). When the lights hit that material as it danced and swayed through the air, visibility was far from an issue. Nudie's suit was a hit and business continued to grow. By the time he approached Roy Rogers in the early 50s, Rogers had already heard of him. Much of the country music world had, in fact. Rogers and Dale Evans easily became regular clients of the Nudie brand, as well as close friends to the family behind it. The list of high-end clients continued to grow and, in 1957, Nudie's work reached one of its greatest highlights. Elvis Presley's famous $10,000 gold lamè suit was designed and crafted by none other than Nudie Cohn. 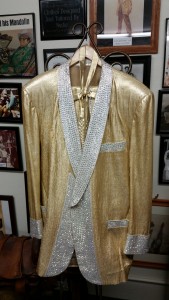 In 1963, business expanded once again; this time to Lankershim Boulevard, its most famous location. Under the name Nudie's Rodeo Tailors, clients over the years included (just to name a few): John Wayne, Gene Autry, Cher, John Lennon, Ronald Reagan, Elton John, Robert Mitchum, Pat Buttram, Tony Curtis, Michael Landon, Glenn Campbell, Hank Snow, Gram Parsons, the groups America, Chicago, ZZ Top, and the Flying Burrito Bros. Cohn basked in his success and strutted around town wearing his own unique rhinestone creations, which he wore with unmatched boots in humble reference to a time when he could not afford a matching pair. Custom automobiles were used to add to his already unique style, including two creations that are now housed within the museum. 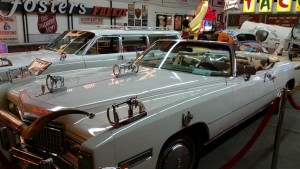 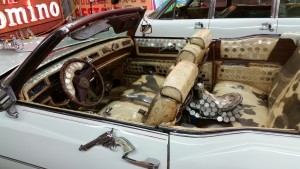 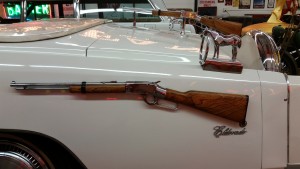 Nudie Cohn died in 1984 at the age of 81. His wife Bobbie and granddaughter Jamie succeeded him, and continued to run the business until the shop's closure in 1994. Though Bobbie would eventually join her husband in 2006, Jamie continues to carry on the Nudie name proudly. She is a fond supporter of the Valley Relics Museum and continues to speak passionately about her grandfather's beautiful legacy.

We, the Nudie family, take great pride in having been able to give the world a piece of our artistry, as well as our hearts!!! We thank you, our loyal customers and devoted friends, for making us a part of history.